BARNES London unveils 'Sacred Garden', an art exhibition around the theme of the garden 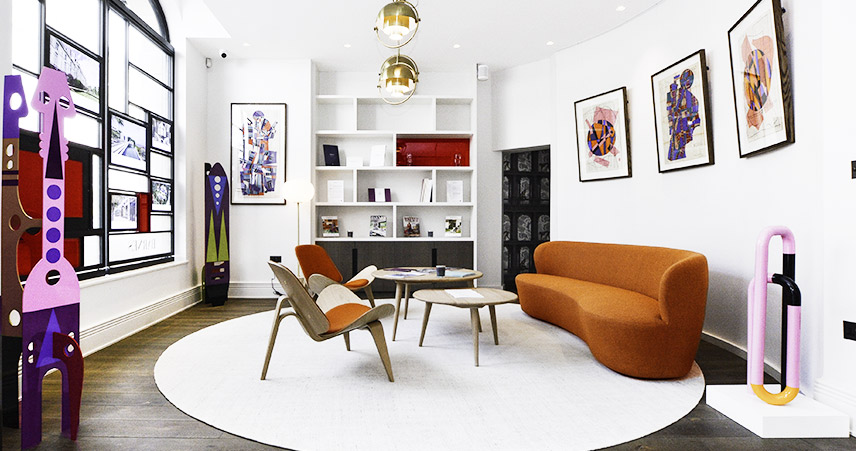 Founded by Heidi Barnes, BARNES Art Advisory aims to assist clients in the management of their art assets and to reveal and promote young talents on the contemporary scene.

The duo exhibition of Egyptian born British artist Sam Shendi’s sculptures and Indian born British artist Hormazd Narielwalla’s collages is curated to create a space full of inspiration and serenity reminiscent of a Sacred Garden in its broadest sense. The space becomes a place of relaxation where one can regain new strength and be connected to the outside world. Stepping into it, an exotic journey begins and the playful interaction between Shendi’s sculptures and Narielwalla’s collage artworks unfold.

The two big stainless-steel sculptures United and Warrior II are standing opposite each other. In a highly stylised way, United depicts two long cylindrical figures that are unified with each other. The figure that is depicted from the side and painted in serious hues supports the other one that is frontally depicted and in vibrant colors, symbolizing mutual trust and respect. The sculpture Warrior II shows a long cylindrical human figure with a mask like head, protecting himself with a large magical looking shield that could embody the power of internal strength. Inspired by the radiant color palette of the African continent, the shadows of both sculptures evoke the idea of ancient spirits.

Behind Warrior II, the large enigmatic collage Remember Who You Are reflects the rays of light shining on it. Referring to the bible, the artwork depicts abstract representation of religious iconography by making use of antique sewing patterns. Usually constructed for the body, the artist utilized these antique drafts to depict the human form in eternal representation. Bold colors, geometrical forms and typical stripes seen in Russian orthodox iconography are used as references to construct the collage, highlighting the heavenly order. A silent dialogue unfolds between Remember Who You Are and a triptych collage vis-à-vis, consisting of The Beginning of the World, The Worshipper and The End of the World. The triptych shows an abstract figure in muted hues between two colorful bright circles.

On the right side under the triptych, a smaller stainless-steel sculpture in joyful colors is placed, called Instrument II, outlining the form of a brass instrument. Thinking of our Sacred Garden, an instrument could be part of the process of worshipping, be it to worship a certain God, nature or life generally. In a quieter part of this Sacred Garden, a large minimalistic stainless-steel sculpture is placed, called The Priest. The sculpture is all black, except for a vertical red stripe in the middle, referring to an African priest that is dressed in his clerical clothes, cherishing all the blessings of our Sacred Garden.

Are you interested in one of his works and want to know more about their history? Contact Emmanuel BOURGERIE, art consultant. 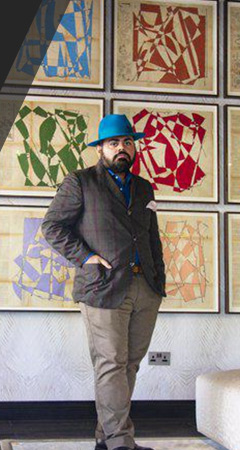 The garden is a metaphor for humanity. A place that is grown for the collective to gather and exchange ideas and thought. A symbol of freedom and refuge, away from order and chaos of urban life. It is a sacred space as it becomes a sanctuary that offers us peace and meditation to contemplate and eflect. A garden is a space for humans and nature to nourish and evolve.

Hormazd Narielwalla (b.1979, Mumbai) is a London-based artist who primarily works in the medium of collage. His practice also compasses original prints, artist books, and sculpture.
Narielwalla’s artworks propose a new interpretation of tailoring patterns as abstracted drawings of the human form.
Freed from function they are drawings ahead of their time, anthropomorphic in origin and beautifully abstract in isolation. 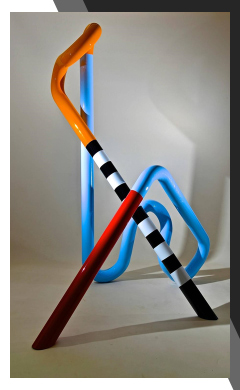 Gardens have been mentioned in the history of my culture for thousands of years. It's basically translated as paradise. All the amazing stuff, everything you could ever imagine  and  beyond  your  imagination  is  in  these  gardens.  We  are  driven  in  my  culture how to best achieve your place in this. Garden for me is a magical place.

Sam Shendi (b. 1975, Nile Delta) is an Egyptian born British sculptor, although his practice  also  encompasses  paintings  and  drawings.  The  artist  doesn’t  like  to  be  assigned to a certain art movement. He draws inspiration from the infinite play with  human  figure  and  interaction  to  capture  universal  topics  and  emotions.  Abstracting from its natural form, Shendi’s works are inserted with metaphors and symbolism. Shendi's sculptures are in public and private collections around the world, stretching from Panama over Taiwan to Johannesburg and Monaco.